1250 years of Eschborn: A town and its stories

In a deed of the monastery at Lorsch an der Bergstraße from the year 770 AD, two brothers donate parts of their property in Eschborn to the monastery.

This deed is the first document mentioning Eschborn. It concerned arable land, 43 serfs and a vineyard, showing that the town was already a flourishing settlement. There is also evidence of Eschborn’s historical vibrance found in remarkable archaeological finds spanning from the Bronze Age to the Romans and Alamanni up to the early Middle Ages.

1250 years later, Eschborn is a modern trade and service centre in the Frankfurt Rhine-Main metropolitan region and the centre of Germany. The skyline of the South Industrial Park is symbolic of the dynamics of a long, eventful and successful history.

Anyone wishing to learn more about the city’s eventful history will appreciate the interesting video portrait on the city’s website at www.eschborn.de/1250-Jahre.

Perspectives on the city

To mark the city’s 1250th anniversary, the city of Eschborn commissioned the Frankfurt filmmaker Pola Sell to produce interviews with citizens about their life in Eschborn and their perspectives on the city.

For the interview shots, a blue sofa was set up in the interviewees’ favourite places at the end of June. The “Eschborn Sofa” was always located in the middle of a public space, on Eschenplatz, in the sculpture park Niederhöchstadt or even on a paddock. On the sofa, long-time residents, newcomers, a female coach driver, a city planner, two recent graduates, a pizzeria owner and two petrol station operators talk about themselves and what they think makes Eschborn so special. The film project shows Eschborn’s diversity and the people who live in this city.

The Eschborn Discovery Map enables you to digitally discover the city of Eschborn, its places and history. Whether art in public spaces, historical buildings, the history of Eschborn or favourite places – different categories enable visitors to discover new aspects of old familiar things.

The map and videos enable older residents to share their knowledge and their city’s history or favourite places so that they are saved from being forgotten and do not fall into oblivion. New residents are given the opportunity to learn about the city.

The Heinrich von Kleist School’s advanced art course developed a logo in cooperation with the Institute for Commercial Graphics, especially for the anniversary. A small jury of teachers, politicians and the cultural officer selected their favourite from ten submissions, eventually choosing the design by Stella Svalina, Tom Barton and Leon Steinbach.

“It was not an easy decision. All of the students developed creative and original ideas and presented them professionally,” said jury member Mayor Adnan Shaikh, praising the young designers.

The winning logo is well suited for use in promotional items due to its appealing shape, which is reminiscent of a coat of arms. It is versatile, lettering can be integrated, and colours can be changed. The logo shows a differentiated group of houses, creating a connection between the old town centre of Eschborn and the industrial area, with a dividing line, which symbolises the Westerbach, and the town rests on the roots of an ash tree.

The Economic Development Department of the City of Eschborn is awarding the Eschborn Digitisation Prize for the third time, with a total of 10,000 euros in prize money. 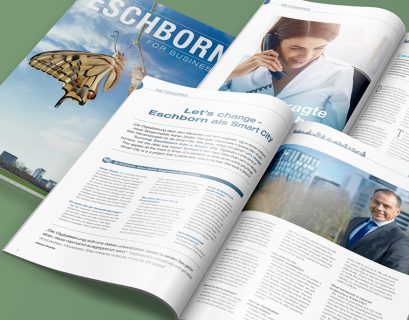